On 22nd October 2013, Tim Cook, CEO of Apple launched the latest version of iPad which was given a new refreshing name iPad Air. Along with this Tim also disclosed new MAC-book pro which is latest tale of MAC computers and also provided lifetime free upgrades on its operating system and business software. This new iPad Air weighing merely 1 pound embarks all the latest software’s module and retina display is the highlight of it. 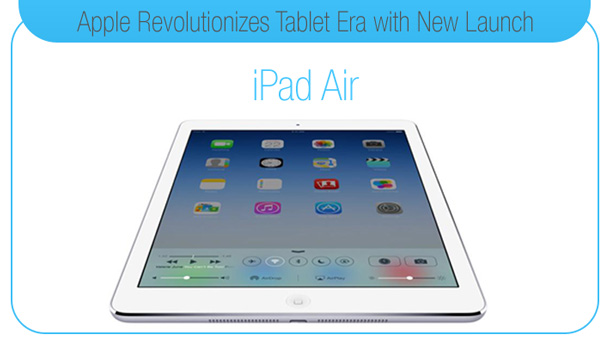 Although Apple has added 128 GB storage option in extension with generic A7 chip to boost up processor power several times and far better LTE coverage but the focal point for consumer to pay $70 more with reference to gen-one iPad mini is its retina display. Also Apple has mentioned that any further upgrades in its MAC operating system and iWork software suite will be available for all MAC book and MAC computers. It was believed that after launching iPhone 5C in the last month, Apple would not unfold this newest iPad Air laded with retina display until next year. But due cut throat competition with Microsoft windows and Google’s Android market, this was coming.

Check this video to get the glimpse of iPad Air functionality and its new retina display technology.

Talking about iPad Air, it is lighter, faster and thinner than its predecessor which was weighing 1.4 pounds. It is 20% extra slim with 7.5mm edge. It will be available in the market from November 1 with the price of $499 and 16 GB space. It is similar to the older Wi-Fi version of iPad which was reliable and gives 10 hours of battery life as prescribed by Apple. By launching A7 chip last month in iPhone 5S, Apple used the same in this model to enhance graphics and make processing faster. Investigating more on retina display feature of iPad Air, it looks excellent to the user and possesses same battery life as its previous versions. This resolution is similar to Google’s Nexus 7.

Obviously Apple had to come up with this kind of twinkle in the market to ensure revenues and hold to its reputation. Tech researchers had forecasted that Android would be leading the tablet market this year with nearly 50% of share, but he Apple team believes that Windows it bigger competitor. iPad will indulge in a strong competition with Microsoft’s Surface Pro as most of the Microsoft tablet provides open access to Excel and Words sheets which is much needed for business analysts. Speaking about camera, lightness of this iPad Air feels like holding a camera while capturing images and Apple has always been top rated in the market for its high-quality display of pictures. This newest form of fifth generation of iPad is definitely going to slam the market leading innovation to a new stage.