Making the History Together

It was July 4, 2011 when an aspiring entrepreneur founded a small scale mobile app development company in Ahmedabad, Gujarat. Today, that entrepreneur has surpassed all the levels of innovation and inventiveness to take his company to the pinnacle of fame. He is Pratik Kanada and his fruitful foundation ‘360 Degree Technosoft’ completed 6 years today. 365*6- that is a handsome time to glow and grow the company. An itinerary of 2190 days is not at all a child’s play as the company’s booming success is corresponding to the honorable clientele, dedicated team members and the pioneers of the company. An auspicious achievement was celebrated wholeheartedly by all the team members doing extra-curricular activities in “Maniar’s wonderland”.

The Nature, the Park and the Team 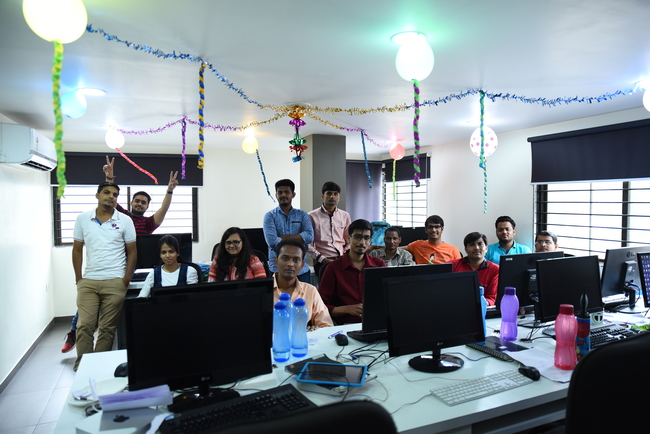 Maniar’s Wonderland- fun world and an amusement park accompanied with family water park is located at Sanand – Sarkhej Rd, Ahmedabad.The nature seemed to join us in celebrating this occasion as it was drizzling, the cloudy atmosphere added more feathers to the cap, and in this stunning ambiance, we entered into the park at 11 AM. Everyone was charged up and energized to free themselves into the open ground of the wonderland. Like every year, the 360 degree technosoft team mesmerized with their splendid participation in every games to make it the most memorable moments of the company.

The Game of Strength

It all started with the most traditional game to measure the physical strengths. Yes, we are talking about ‘Tug of War’; two teams were made and a series of 5 games were exercised. Not only was this game the funniest but also it made the surrounding comically noisy as every individual was like ‘Zor lagake….’,’ Come on guys, we can do it..’, ‘We are the strongest…’ and of course the rest were totally focusing on the game to win (Though win or lose doesn’t matter). The team were bifurcated into ‘Developer’ and ‘Marketing’ team and as it happens the ‘Committed Developing Team’ won this series. The laughable part comes now; some would shout, some would roar, some would Booo, some would roll over on the ground, some would hug and clap.

What will happen when the next conventional game ‘Nargol’ was played? The Marketing team were all set to dominate the game. All eyes were on them when the first game began. The sarcastically funny players in both the teams would pass the winning comments for their own team to lead and win. ‘Ye Game hamari hein’, ‘Ye to Jeet ke hi rahenge’, ‘We are the Game changer’. Here the Marketing Team came into the play when CEO himself cheered their spirit and as expected, the direct hits to the small-stones by the marketing players were scintillating and mind boggling. The running, hustle-bustle, screaming out your player’s name, sweet vociferation continued but this time the winning team was not the ‘Developer Team’ then. 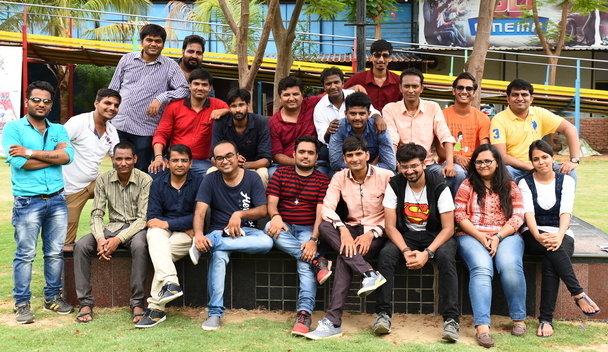 Then, the team needed no direction as the Bungee Jumping, Flying Disc, Over-throwing the ball, Penalty shoot out, dodge ball, and many villagy game that began to accelerate everybody’s mind to re-blown after the primary games played. The team was now the family in whatever things they do, share, express, speak, mimic or gesticulate. This was the most crucial moments captured in the 360 degree lens where the jolly and jaunty team mates would enjoy every tiny moment as an unforgettable instants.

After all this adventurous and mettlesome running of activities, it was time for the tummy to strike. It did indeed, pretty well. The Real Hunger Games started when everybody leap towards the food-zone. The giggling, the kidding, the make-fun-of, tittering, riant was accompanying the lunch as it was the relaxation time to eat-laugh-buttermilk-repeat. 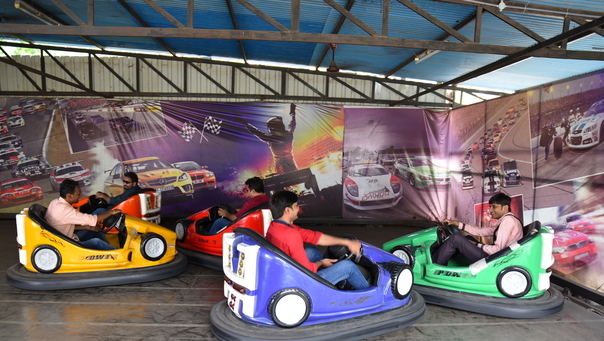 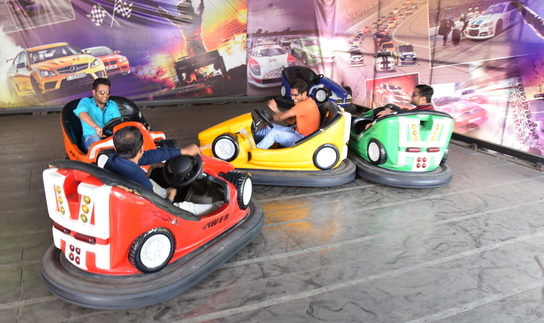 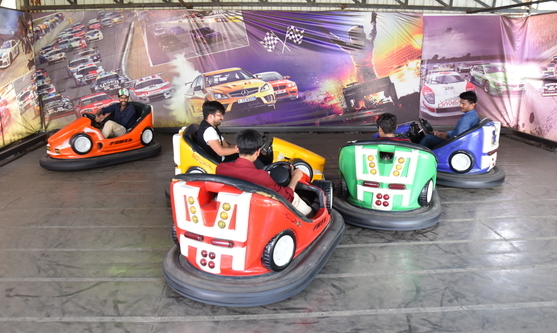 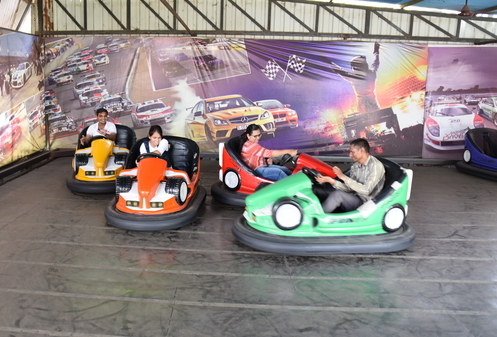 Are you in the mood to digest your food instantaneously? Well, that seems pretty tough, not until you sat in the mini-car which is about to crash. Heaven, Yes! The team relished and reveled this game like no other as they were virtually driving it to their lives. Some wonderful and marvelous photos are captured in an unwitting manner. Car is crashing, bumpers ahead, brakes are applied, accelerators thrashing, and wheels drifting. Is this Paradise? No, it’s an amalgamation of Wonderland and 360 degree technosoft team.

The In-line Round Coaster 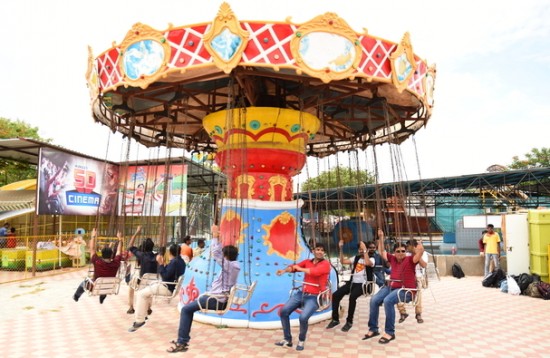 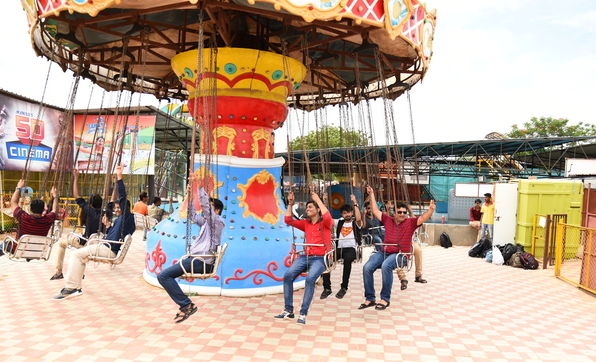 ‘Abhi to Car-Crash ka Junoon Gaya nahi tha ke..’ The Ride was fainting but adventuresome, swooning but stunning; it took us to the high-feet from the ground winging ourselves into the winds and aviating into the breeze. The yell, outcry and sweet call out of the friends’ name and the round coaster has been seized in the round camera. Can it be any better? 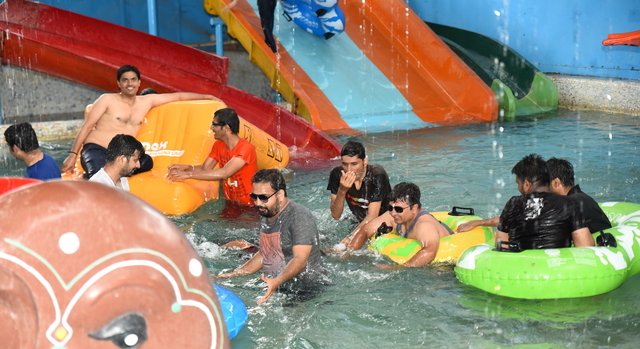 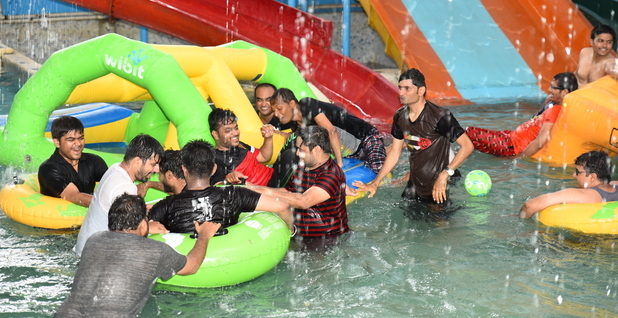 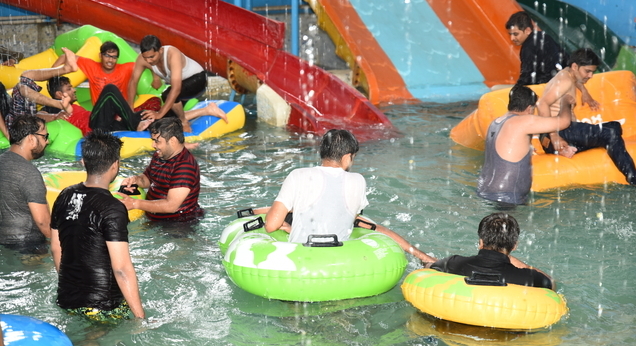 The Giant family swimming pool was kept waited when after all the full-fledged merriment and playfulness, it was time to loosen up the body. The water ride, the water tubes and the water splash were all over everyone. You dive, you lie, you sweep, you slide, and you sit on the water. No matter what, you are in the cold freezing water and all your stress is fetched out; yes, that’s the magic of swimming pool. The Ride was awesome and every team player had an astonishing experience of Joy-Ride-Tour-de-360-degree-technosoft.

We work, we laugh, we share, we care, we achieve, we do the things others don’t. We, as a family, strives to take the company to the next level of excellence. And the good thing is it’s not a single person’s job but we do it TOGETHER. As they say for us, “We work hard, We play hard.” We, the team of 360 degree technosoft, share this intensity of making the six sensational years of amazingly consistent work atmosphere and fun atmosphere.

I own a content marketing firm 'Write Right'. Of all the books I have read, I could pen down: The Weak Point Dealer, Will You Walk A Mile? and The C To T of Content Marketing. Off the topic, I am the unproposed guy and lame loader people blabber about. Rapper, Raconteur and Rambler.