Google’s Nexus 2015 Event Was A Show Stopper: The Highlights

Google has been grabbing a lot of attention of lately, with big announcements and product releases on its way. The 2015 event that happened on 29th September has Google announcing the different products the company is planning to launch. 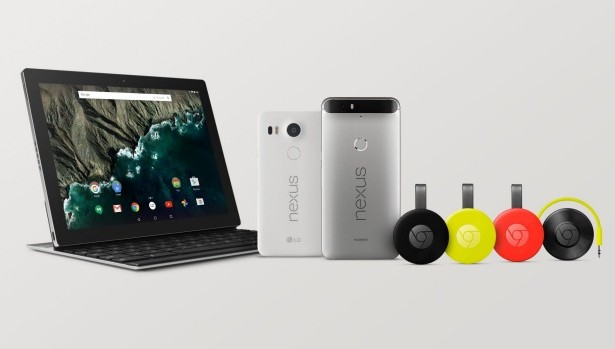 Rumors about new products had been doing the rounds for sometime, with people anticipating the launch of the new Nexus phones, an updated version of Chromecast, a new tablet and even a new android update. It turned out Google had some more stuff in store for its customers.

After a lot of rumors and discussions, a couple of Nexus smart phones are all set to be launched soon later in this month. They are called the Nexus 6P and the Nexus 5X. Going into technical specifications; a product of Huawei, Nexus 6P comes with 64 bit processor, has a metallic body, 12.3 MP camera, 8.0 MP selfie camera, a QHD display, 3450 mAh of battery and a Touch Id fingerprint sensor all within a 5.7 screen. Its starting price is $499.

The next phone is the next in line to Nexus 5’s legacy called the Nexus 5X. The features are toned down as compared to Nexus 6P with rear camera of 12.3 MP and a front camera of 5 MP, it has a plastic body available in different colors, comes with Qualcomm Snapdragon processor, touch identification sensor with a battery life of 2700 mAh and the size of the screen is 5.2 inches. This is priced at $379. Both of them come with Android 6 Marshmallow operating system and both of them are available for pre order at Google store in USA, UK, Japan and Ireland from 29th September.

Not only this, on the purchase you will get 90 days free subscription to Google play music and $50 Google play credit for US customers only.

Since the time Chromecast was launched two years back, it has been Google’s one of the most successful products and an update was being expected on this from quite a long time. So, here it is, the all new refreshed Chromecast.

Starting from the appearance, they no longer have a dongle appearance but are now handier with a circular shape, flexible cords and different colors so that you can match them accordingly. Going into the technical aspects, the real update is 802.11ac Wifi, 5 GHz Wifi and presence of intelligent antennas that will improve its performance greatly. Apart from that, the new add on feature is the Chromecast audio that enables it to connect to any speaker and then turns it into a streaming device.

It can be controlled through any android device connected to the network. Also, if the guest share mode is on, you can even control the other speakers within the room. The best part of this is, so many improvements, yet no updating on the price which is still $35.

After the release of a couple of its developer version, the Android 6 Marshmallow operating system is finally here and the Nexus phones to be launched comes with it. There are a lot of improvements from the previous one.

Another major device that attracted the spotlight was the new convertible tablet called Pixel C Chromebook where in the C stands for convertible since it can be converted from tablet to laptop and vice versa with the help of Bluetooth keyboard.

It has a storage of 32 GB and is priced at $499 and an additional $149 for the Bluetooth keyboard. It has a display of 32 inch and come with dual stereo speakers and has USB-C type charging. It is due to release somewhere around the end of the year.

Apart from all the major announcements, there were small bonus gifts as well in the form of first significant features release of Google photos which includes editable photo albums, custom photo tags and sharing facility over Chromecast.

Apart from this, Google came up with $15 per month family subscription for its customers, which lets six members to share their subscription and at the same time manage their own music libraries attached to their respective Google accounts.

Hot on the heels after Apple’s special event earlier last month, it seems Google has not disappointed its fans. After the failure of Google Glass, which forced the company back to the drawing boards, many thought where the company was headed to now and what else it had up its sleeves. Google came up with more than what was expected and we hope that these devices turn out to be better than expected.