How To Refine Android App Development Efforts in 3 Ways?

With time, Android app development has evolved and continues to do so. Google surely has a gamut of developer oriented tools to help them glide through. But what if, those tools serve nothing but act as gimmicks for your app? Will you drop them completely or use them in a smarter way? 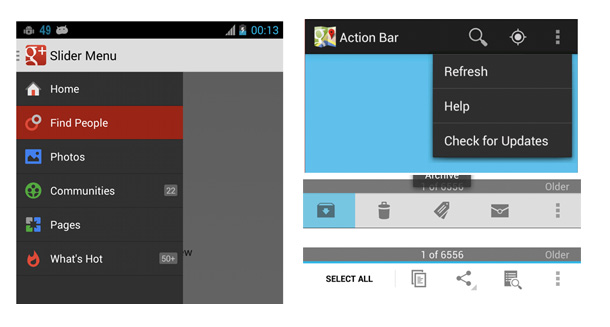 This answer can be best answered based on individual needs and offerings.

Here I have listed 3 Android app functionalities you must re-think:

Place logo in the action bar, that’s what Google wants Android app developers to do. If you give this guideline a deeper thought, you realize that this may not really work, if you build a highly targeted app. For generic apps, this approach may offer the much needed context. For instance, Facebook’s uses its action bar to offer navigation and context than wasting it on the logo.

If Android app developers simply drop the logo from the action bar, the approach seems much screen-friendly. Owing to small area of the smartphone real state this space is used to provide navigational control and context to the app. Besides a majority of Android apps do not follow this guideline, as stated by Google. Most Android apps thrive on visual branding and a unique user interface for users to connect with the app.

As an Android development company you may lose revenue via apps offering poor navigation. It is common sense that users will use your app if it is easy to understand and work on. Good apps offer focused navigation with not more than four to five items in the bar. If you simply club the navigation bar with too much, you have already lost it half-way.

Before you jump on to implement Google’s navigation drawer, ask yourself, do you actually need it? Drawers may look cool and allow developers to work out their creativity to the fullest. But, you must put yourself in the shoes of your users and then re-think your navigation drawer’s role.

Unless, you are a well-recognized Android app development company you cannot risk creating icons, without mentioning their purpose. Google asks its Android app developers to build apps with unlabeled icons. It’s good in a way that you can save time. But, wait a minute. What about first time users? Won’t they be completely lost while navigating your app?

Placing a single word under your app icon enhances user engagement. It gives them a clear understanding of what they are expected to do? Users are not interested in the complexity of an icon. They want something simple to understand and relevant to engage with. The purpose of an icon is to lead users from one step to the next and not merely leave them hanging in between.

Rules are for Breaking

To really stand out from the crowd, you will have to give up on some rules, which are self-defeating. If Google’s guidelines come in the way of your app’s purpose, then you must re-do it or drop it completely.

When a user hops on to your app, greet them with:

Anything, above this is an incentive to the user and anything below will suffocate your app. At the end of the day, Google wants you as much as you want the platform. So, give a thought to Google’s functionalities to build smart and user centric apps and boost the collaboration.