At first, we were confused between whether native or cross-platform? Now, that we know for high performance, its native and for speedy development it’s cross-platform. The wheel of confusion still continues now the confusion is between Ionic and react Native. For a naive, its kind of difficult to pick a framework for app development without the proper understanding of both or without knowing the ups and downs of each one of them. Here is a comparative study of both these frameworks, their pros and cons which will assist in picking one for your project.

It is a part of the hybrid app development framework. About the Ionic 2, to be very specific it is not a mere rewrite of the previous ionic version. In fact, it replicates the structure and the design of AngularJS 2. Some of its designing parts also resemble Android language, material design, and iOS.

Ionic works on the top of Cordova which allows the hardware functionality to the apps. In simple terms, it gives your app the WebView. This allows the apps developed with Ionic to access the mobile functionality like contacts, camera and such other. Compared with React Native, the performance will be slower on the grounds of HTML code to be written in Android. There can be performance issues or graphical issues if the processor of the user’s device is slow. Here are some of the pros and cons of a better understanding of ionic 2.

1) The app testing is faster.

2) It complies with both Android and iOS.

3) The learning curve of ionic is easy and working is simple.

4) TypeScript can be used for developing apps of all platforms.

5) If the project is small then Angular is easy to learn and work as compared to React.

6) By integrating the plugins, the native functionality of the app can be accessed.

7) Coding in TypeScript will be a lot easier if you have an AngularJS 2 background.

1) Performance issues can be a big downfall if many callbacks to the native code are used.

2) Advanced graphics and interactive transitions will be complicated with ionic 2.

3) If the users are fond of the native UI look, then the same UI design in every device will likely put them off. 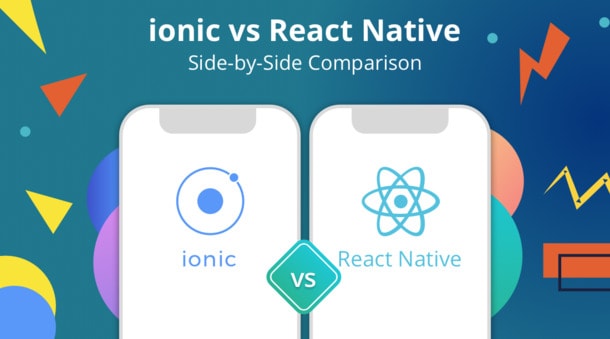 An app developing using the React Native framework is a native app and not an HTML5 or Hybrid app. The code is to be written in react components which will then reflect the native UI components in the mobile app. With React Native, a high-quality app can be created but in return, it asks for higher learning, increased effort, and more maintenance. React Native is developed by Facebook and is an extension of React.js making use of the similar principles as that of virtual DOM for updated UI. Once all those UI changes are incorporated, they are applied in the batches. The best part here is that you don’t even need to touch the UI thread and yet you will get a responsive UI. The downfall is that the communication with the underlying native OS is very slow. If you have been using react, you would know that it focuses highly on the UI and React Native is no different.

The components here are written in HTML, CSS, or JavaScript but it makes use of the native components behind the scene. The user will feel no difference in a React Native app or Native app. One of the upper hands of React Native is that it’s not a web-based app like Cordova for Ionic or PhoneGap and the implementation is rapid and runs efficiently on mobile devices as well. Well, its still a cross-platform framework and hence the same code can be used for developing both Android and iOS apps. Let’s look at the pros and cons of React Native.

1) Stability is higher and gives fell of the pure native app.

2) The same code can be used for iPhone, windows, and Android app development.

3) The performance is better than Ionic 2. The reason being the processing of hardware functions is through a specific platform and not by Cordova.

4) If the project is big, it’s easy to maintain the app developed by React Native as it follows strict design systems and patterns.

1) As the performance high, this framework is meant for hardcore and long projects and also adds to high costing.

2) Converting HTML code to native code can be tricky and involve bugs. To fix bugs, the developer must know swift or objective C.

3) React Native was basically developed for iOS and hence you might have to work from your end a little extra. The user might get an outdated feeling if you use JavaScript and belong to the Typescript background.

4) Native features are to be integrated without any plugin. No web layer has to be used over the platform and makes use of the core features of the device to give the users feeling of the native app.

5) Although, write once and use anywhere applies and you use the same components but still you will have to maintain separate codes for Android and iOS. This means that the workload would increase despite the difficult learning curve.

If the project has rapid development needs or it is just about the prototyping or the budget of the project is a constraint and the performance is not a strong need then ionic 2 is the choice. On a contrary, for a high budget, performance-rich, and long-term project, React Native is the choice.

Why Should Travelers Use A Travel App?

How To Build A Tip Calculator App?