How Android Apps Will Growth Hack Your Business?

Today, the tech-quote goes by, “A business without mobile application is a startup without investment.” Well, it is true, isn’t it? It ought to be when it is accepted universally. Have you noticed about the current trend’s business or newly established venture or organization? It will be concluded that every business will have a genuine/legit, static or dynamic, user-friendly and instructive mobile applications; this not only helps the business to grow but creates an identity, image and a brand prestige in the market. 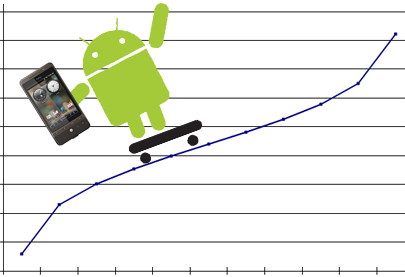 Do you have a business idea and would like to turn it into reality? Then the best way forward is to develop a mobile app, especially in today’s mobile friendly age. Today, smartphones have become a regular phenomenon with nearly everyone on the planet now possessing a mobile gadget or a smartphone. Now, you would ask why Android apps and why not apple apps? It is pretty obvious that the current drastic and increasing level of Android smart phones have led the competitive market to design and develop more and more android apps than apple apps.

“India will become the second largest smartphone market within the next two years unseating the United States in the process.”

Android opens up several possibilities for android app development company who are keen on utilizing Android to take Android app development a notch higher. The Android SDK also provides developers a variety of ways to create a range of apps for various industries and verticals. Since it is written in Java and C++, Android is, in reality, a package of programs that takes custom development way ahead.

According to GSMA’s real time tracker,

“The current number of mobile gadgets in the world stands at around 7.62 billion, while the overall world population is at around 7.2 billion people.”

With the power of Android, it is absolutely capable to develop a wide variety of Android apps for a  multimedia, travel, games, ecommerce, etc. The market is going exponential because of the ease of use of Android apps and the massive popularity of Android smartphones. From a business point of view, an app is usually designed to fulfil a USP of a particular business. When an app becomes successful, it is usually because it fulfills a critical selling point of the product or service for which it is developed. Moreover, Android is a boon for developers since it is a Linux based opens source platform that is available for free. Hence, this technology can be easily leveraged for your business by building a customized app for your specific business.

“In India, the smartphone market size will be correlated to the population size.”

Thus, if you want to be a millionaire entrepreneur, the app you develop could make your app available for the entire smartphone segment that uses Android to power their phones.Users can simply download the app and connect to your company’s services or website via the app and perform their desired transactions! So, you can conveniently make the next powerful move in your business with the help of Android Apps. Therefore, Android application development and Android apps on the whole can become a powerful medium to promote your business. To sum up, it can be easily said that advertising, customer retention, brand promotion and brand awareness can be taken up in a robust way with the help of custom Android apps.

“Android now powers 85% of the smartphone market, a figure which no florid businessperson can afford to miss.”

Android app development to a large extent has the possibility of expanding your business to a very large extent. It is extremely essential that you hire the best in class Android development professionals for your growth. Choose someone who has wide exposure to many verticals across several industries. The business processes are simplified as well as various business processes and strategic business units (SBUs) can be managed profitably. Nowadays, many Android app development company offers custom Android development services so that you can leverage the power of Android to foster your business and reach your goal.

Do you want to leverage the power of android applications? Contact 360 degree technosoft.