What is Better Java or Kotlin – Pros, Cons And The Conclusion

Beginners, Intermediates, or the experts all of them are in the same dilemma Java or the Kotlin? You have two colleges to enroll yourself, how would you pick one? You will weigh the advantages of both of them, also pick out the disadvantages of both, look forward to the future of both of them and results, and demand. Well, then now you know how can you know the best from Java and Kotlin. Are you an Android app development company or a developer? If yes, you might have studied it deeply and still be in the conundrum which one would client and the user would prefer and which one to adapt in the development process. Let’s start with the ancestor language Java.

When the idea of developing an Android app hits your mind the immediate thought which pops up will be of Java. A huge number of Android apps are written in Java which is now gradually changing. Well, Java is an established, experienced, a reliable language with a bigger community of developers. This clearly means learning and troubleshooting issues with Java will be a lot easier. Also, the popularity level has grown and there is no full stop to it. Over years of use and dependency, Java has created a vast market for itself. Java seems to be an object-oriented programming language and attained the position of the second highest active language on the GitHub.

1) The learning curve is short and easy.

2) The Android app development process is swift than Kotlin.

3) Handling large project is easy with Accelerated assembly with Gradle.

4) It is open source basically because of the adoption of the JVM for Android.

5) Java is a preferable choice of language when it comes to developing a cross-platform app.

6) Java can really adapt with almost anything whether it be a browser window or it is a virtual machine. This will prove to be a great boon when you are working on a software update or when you want to reuse the code.

7) In a way, Android is dependent on Java as the Android SDK consists of several standard Java libraries.

1) It needs higher memory and works slow as compared to the other programming languages.

2) It needs more coding which makes it more prone to errors and bugs.

3) Java is ancient but is not modern which means it has a certain limitation which creates some issues with the Android API design. 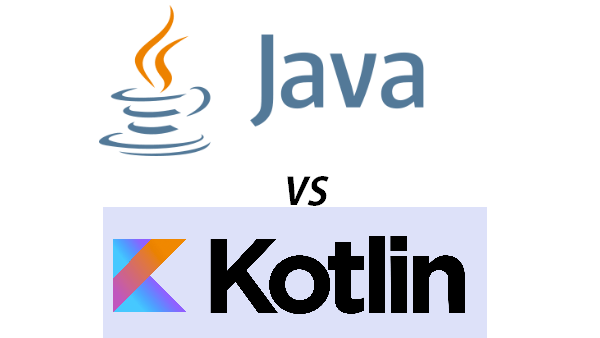 It’s a language which is statistically types and designed to run on the Java virtual machine. The nice part is that it can also be compiled with the JavaScript source code or make use of the LLVM compiler infrastructure. The language is new, modern and has total support from the Google.

1) Received a lot of attention from the Android community and the bonus point is that it can also be used in the backend development like Spring 5.

2) Compared to Java, Kotlin is way more concise and hence the chances of errors are probably low.

3) Developers are privileged to make use of the Anko Library and currently, there are over 2000 Kotlin projects on Github.

4) If you intend to make a switch from Java to Kotlin then it is easy. The process is short and sweet, Install Kotlin Plugin, add the plugin to the Gradle build files, and then select convert. You are done. It’s this simple and easy.

5) The developers can now build cleaner APIs by including the smart extension functions.

6) Kotlin contains null in its type system. Nullability is the most common issue with the apps developed with Java and as Android basically uses null to represent the absence of value, Kotlin makes it easy by putting null directly in the type system.

7) One of the major pros of Kotlin is that it works well with Java. The developer can create new modules with Kotlin and you can rest assured that it will work well with existing Java code.

2) The compilation of Kotlin is extremely slow compared to Java.

3) The learning takes increased time as the language is comparatively new and challenging and also the language has a concise syntax.

4) The experienced Kotlin developers are very rare and hence be extra careful while choosing the tutor. Finding the right expert can be really tricky.

5) The developer community for Kotlin is really small and also the answers to all the queries are not available on the ground of the language is new.

We learned the ups and downs of both the languages and it seems like picking one is yet so difficult. The final conclusion is if you are a newbie trying to put your baby steps in the Android app development, Java would be easy to get started with. If you are already an expert and have not left any page unturned of this field, I guess its high time you should start learning Kotlin and working on it. The type of project and the client’s requirements are also crucial factors in choosing the language.

One thought on “What is Better Java or Kotlin – Pros, Cons And The Conclusion”

Why Should You Choose React Native For App Development?

How To Accelerate Your App Development Process?